I Never Heard A Robin Sing 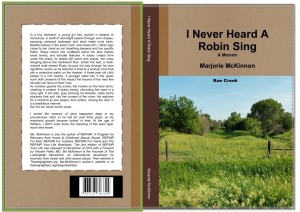 She grows up in a patriarchal, Catholic family in small towns in the Midwest. When she is thirteen her father rapes her as she lies asleep in her bottom bunk. Screaming for help, her mother eventually comes into her bedroom after her father leaves and convinces Marjorie that she has had a nightmare. These “nightmares” continue until she is eighteen, when she runs away from home, spending the next 22 years going from one abuser to another. Two suicide attempts put her in a Psychiatric Ward. There will be more.

At the age of 45, now married to her third abuser who is both sadistic and violent, she enters recovery, living part-time in a women’s shelter, writing a memoir in the desperate hope that it will help her in her search for the cause of her dysfunctional life. It will be a five-year period where she not only develops her own program of recovery while living in a domestic violence situation, but goes through a sexual harassment suit where she works.

The two difficulties push her to the edge of her final suicide attempt, one that contains a miracle she can’t explain, that saves her. Once she has completed recovery, having rid herself of her abuser, she becomes the happiest person she knows. After recovery, she spends three years developing the REPAIR program, a compilation of all she’s learned while in her own recovery.

Click here to purchase a Kindle version from Amazon ($2.99)